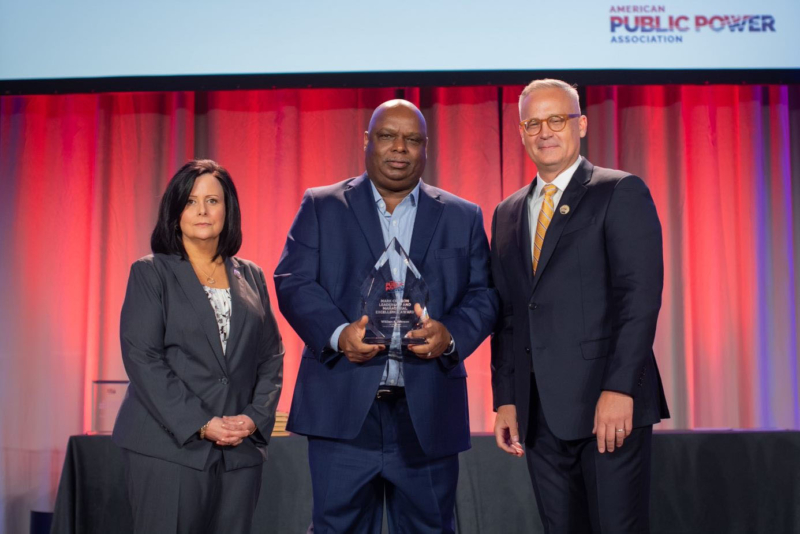 (KANSAS CITY, Kan.) — William (Bill) Johnson, general manager of the Kansas City Board of Public Utilities in Kansas, received the Mark Crisson Leadership and Managerial Excellence Award during the American Public Power Association’s National Conference in Orlando, Florida.
The award recognizes managers at a utility, joint action agency, or state or regional association who steer their organizations to new levels of excellence, lead by example, and inspire staff to do better.
Bill currently oversees all functions of the Kansas City Board of Public Utilities (BPU), including 600 employees, an annual budget of $348 million, 800 megawatts of generation capacity, and 65,000 customers spread over 135 square miles.
He is the first African American to be appointed GM of BPU, and a recognized leader and mentor for the community through his professional affiliations. Throughout his career, he has helped identify, implement, and champion several initiatives to improve the efficiency, reliability, and affordability of electric service to the community. This has benefited BPU and the industry by setting new standards, utilizing new technology, promoting conservation, and reducing environmental impacts. He has helped KCBPU become a recognized leader in renewables and energy efficiency, highlighting the importance of protecting the environment for a healthy community.

One Year Later, Day of Celebration!
Scroll to top