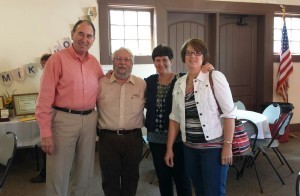 Mike Gilliland, Osage City’s Director of Utilities is retiring after 40 years of service.   While Mike will be entering a new chapter of his life, the rest of us are left with that feeling that all good things must come to an end.  Mike’s retirement reverberates well beyond the confines of Osage City with the many friendships and relationships he has forged over the years as well as his leadership and countless contributions.  With the timing of his retirement, it is particularly befitting that Mike was selected by past winners as KMEA’s 2014 Gil Hanson Award winner.  The award, named in honor of KMEA’s first General Manager, Gil Hanson, recognizes those who have made significant contributions to municipal joint action, their communities, the electric utility industry and public power.

Mike will be dearly missed by his KMEA/KMGA family as he has been involved with KMGA from the very beginning of the Agency and an Executive Committee Member since its inception, including terms as President and Vice President.  Mike truly exemplifies the adage “if you want something done, ask a busy person.”  Mike’s finger prints can be found all over the good work he has done in Osage city, including management and oversight of the municipal swimming pool, two city owned and operated cemeteries, and many of the city’s buildings and facilities. As Director of Utilities for the past 14 years, Mike always had a full plate of regulatory, compliance, and technical projects as well as contractual agreements and energy purchasing.   Even still, Mike was always actively engaged with municipal, state and national trade organizations.  Mike especially enjoyed his involvement with various Kanas utility organizations including KMEA, KMGA, KMU, KWEA and KSWWA.  Mike officially retired on June 30th.  Please join us as we extend our gratitude and best wishes to Mike in his retirement.